Do not touch, drive over, or attempt to move any downed lines (this includes communication lines). Notify EWEB as soon as possible. Remember, do not touch, no exceptions, period.

Stay Informed During a Storm

Follow us on Twitter and Facebook for information during a storm and listen to local radio and television stations for regular weather and City storm response updates.

The City of Eugene has increased its response readiness through the addition of two more snow plows. This brings the total to 14 plows. This increase will allow for more snow removal efforts on bike and pedestrian paths.

Maintaining city streets during winter storm conditions is the responsibility of the Public Works Maintenance Division. The Public Works Ice/Snow Emergency Plan is designed to keep the major thoroughfares of the transportation systems operational and safe during ice and snow events. The Public Works Parks and Open Space Division is responsible for responding to tree hazards.

Not all city streets receive service during winter events. Ice and snow routes have been established and prioritized into three categories. Routes are grouped by geographical area. During a storm event, the main emphasis will be on Priority 1 and 2 Routes, which largely include arterial and a select group of collector streets. Police and fire requests, primary streets to hospitals, schools, and LTD snow routes are also among some of the top priorities in the Public Works Ice/Snow Emergency Plan:

If you are not on a Priority 1, 2 or 3 Route, it is likely your street won’t be plowed. Streets not identified as priorities may receive service based on storm type and resource availability, but only after priority routes are addressed. Please make plans ahead of time to be prepared and, when possible, check on vulnerable neighbors to see if assistance is needed.

The Maintenance Director or designee may alter priorities during the course of an event to accommodate emergency services or when more severe problems or conditions are present in a specific area of the City.

The ordinance gives the City the authority to tow vehicles parked or stranded along emergency routes. By banning parking, the City can ensure that emergency vehicles, buses, and other essential traffic can move safely around town, and that parked and stalled vehicles do not hamper snow removal operation. We apologize for any inconvenience.

What Community Members are Responsible For

Keeping walkways and streets safe and accessible during a storm involves the entire community. Property owners are responsible for maintaining their sidewalks and driveway aprons (where sidewalk crosses driveway) in good repair and safe condition, which includes clearing ice, snow, slippery leaves, and other debris, per City Code. Please check in and help neighbors when possible.

As soon as possible, clear your sidewalks and driveway apron. Property owners should maintain a space so pedestrians have a safe path free of snow, ice, and other debris. Property owners are also required to advise people of any danger of falling ice or snow from their buildings. Please make arrangements to post an advisory sign or sandwich board and eliminate the hazard.

During the plowing of priority routes, crews will create a snow berm in front of driveways. This is unavoidable because plowing requires moving snow to the shoulder of the street. Limited plowing resources don’t allow for the clearing of snow at the thousands of driveways our plows pass during snow removal. Plows may make multiple passes on your street before moving on. Property owners are responsible for clearing away the snow berm from driveways and entrances.

Businesses hiring contractors to remove snow from lots should never dump snow on the street or in the public right-of-way. All snow needs to be placed on private property.

Unfortunately numerous types of inclement weather can cause tree failure and our response needs to be adaptive. Depending on the type and severity of the storm, roads may need to be cleared before tree hazards can be addressed. Also be advised, requests for service are not handled in the order they are received. Rather, we triage early response in the following order:

After the initial response is complete and the most immediate hazards are cleared, we transition to a systematic sweep by zones. It can take weeks and sometimes several months to clear tree debris from the right-of-way across the entire city.

To report other downed trees along streets and in medians please visit our Service Request Page and choose Tree Service Request or call 541-682-4800. In the early phase of storm response, we will use citizen reports to help dispatch crews. As roads are clear and driving becomes safe, City staff will canvas streets to identify and prioritize the response.

If a tree has been marked with paint on its trunk, it has already been identified by staff and does not need to be reported.

City crews will only respond to privately-owned trees if they pose an immediate threat to the public safety in the right-of-way. We do not perform work or offer consultation on private trees otherwise. 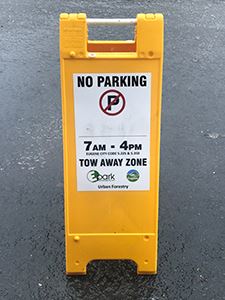 If a no parking tow away sandwich board appears on your street asking you not to park there, please move your car. This board indicates that we have a tree hazard to address. In order to create a safe work zone, we will need to tow cars that remain. In general, if there is a storm on the way, it’s best to move parked cars on streets to driveways when possible.

Be aware that in a storm event, City of Eugene crews will likely leave brush from publicly-owned trees piled along the curb for pick up at a later date. Do not add debris from private trees to the curbside.

Homeowners are responsible for cleaning up and disposing of privately-owned trees and should not place debris in the right-of-way. Debris needs to stay on the homeowner’s property and must not be placed near or past the sidewalk.