What is the Law on Graffiti?

Under state law, "unlawfully applying graffiti" and "unlawfully possessing graffiti implements" are violations and punishable by a fine. In addition to a fine, a defendant may be ordered to perform hours of community service in order to remove graffiti. A person can also be charged with criminal mischief, which can be a misdemeanor or felony charge, depending on the dollar amount of damage or restoration costs. These crimes are punishable with higher fines and the possibility of jail time.

What is Eugene Doing to Fight Graffiti? 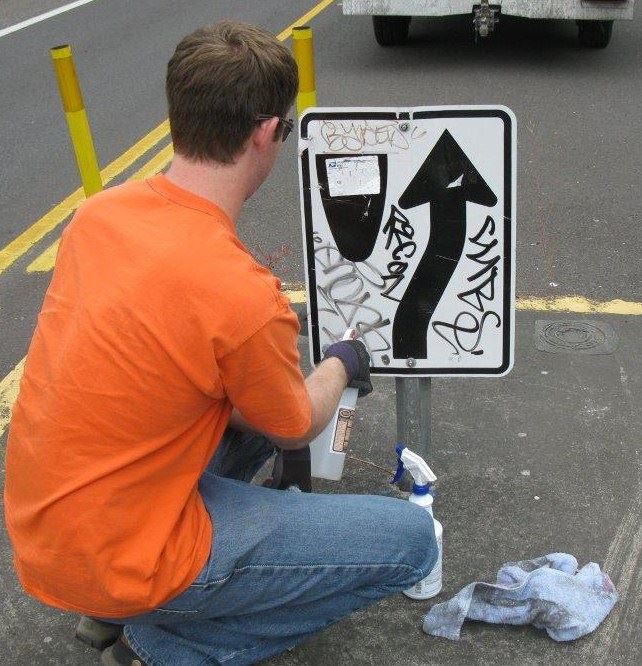 Each year, the City of Eugene Maintenance division removes over 9,250 tags on public property, including USPS mail boxes and utility owned surfaces.

The Volunteers in Policing program established the Huckleberry Patrol Team, a volunteer-driven graffiti abatement effort. The team locates, documents, and removes graffiti primarily on private property in midtown Eugene (11th to 15th, Charnelton to Ferry) and surrounding blocks. The program runs April to November, depending on the weather.

How Does Public Works Remove Graffiti?

Public Works uses several methods for graffiti removal, picking the best one for each tag and surface. Choices include a hot water pressure washer, paint, replacement of the item that was vandalized, cloth and elbow grease, and an environmentally friendly chemical.

What to Do About Graffiti?

Property owners are encouraged to remove or paint over it immediately. Local paint stores can provide helpful information and materials to remove graffiti.