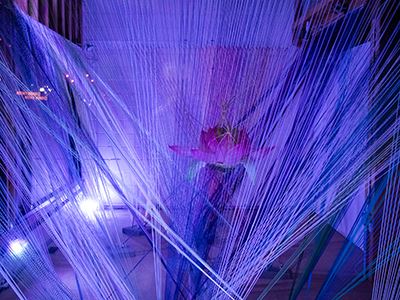 About: Combining Western and Eastern concepts, my work explores the different relationships that exist between contemporary practices and conventional approaches in visual arts.

This work is a self-reflection about how we can construct our internal world by contemplating time. My work explores visibility and invisibility with the concept of time and spontaneity and physicality in the process of installation. It examines worldviews of time and space through Eastern and Western perspectives and reflects the meditative experience of emptiness as dynamic space. My work is rooted in the Asian belief that life is a cycle while also reflecting the principle of Yin and Yang. I use these concepts and theories in order to express my response to the natural flow of life and the duality of ideas between the East and West. My installations incorporate both concepts of time from the West and East — one from the West where time is understood as linear and one from the East where it is regarded as circular. They represent the progression of time that embraces and filters all human emotions in its immeasurable vastness. 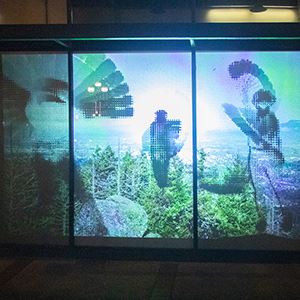 Project description: How do we move through familiar spaces? Who sees the city from the top of the Butte after a hike? Who witnesses the changing face of the city as they move through its streets?  Different locations create the opportunity to make a choice for a different kind of movement, which in turn affects the way we see the world. By offering a view of the city that would normally be impossible to experience from within it, this corner can become a mirror or a portal to those who move beside it. Here is a chance to be transported high above the city, out into nature, and back to the corner of 10th and Willamette, all while considering how our bodies can decide to move or dance between them.

This site-specific video installation combines video footage recorded from the top of Spencer Butte with documentation of a dance performance. The software called Isadora was used to capture video of dancers in front of a camera and create an animated render of the movement in combination with sound inputs in real time. The resulting pulses and stylized changes in the image are the results of a now-lost soundtrack, replaced with the sounds of the buses, cars and people around the installation.

Artist statement: Hannah Hamalian (she/her) is an interdisciplinary artist who is curious about how movement can be used to represent the unspoken processes that weave us together, both as individuals and as a community. She is intrigued by how complicated the world is and aims to speak the language of complexity by experimenting with animation and film in poetic, rather than narrative, modes. She works with the motion of dance and structure of landscape to wrestle with paradox, seeking the multiple layers of experience at work in any given moment. Her intention in any of her work is to create a space specifically designed for asking questions.

Hannah is currently based in Eugene, Oregon, where she teaches at Lane Community College in the Media Arts department. Her work has screened and shown at festivals internationally, including ADF's Movies by Movers, KLIK Amsterdam Animation Festival, Athens International Film and Video Festival (Ohio, USA), and the Squeaky Wheel Animation Fest (New York, USA). She received her BA from Carleton College and her MFA from UW-Milwaukee.  hannahhamalian.com 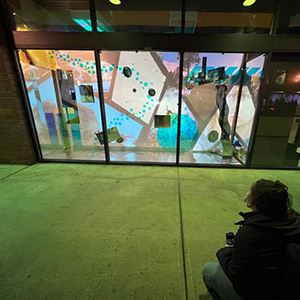 Project description: This project, “Seeing Within (Seeing Without),” is an invitation to the community of Eugene for a cathartic experience, a space to process all that we have collectively felt in this time of the pandemic, social uprising, wildfires, etc. As the pandemic drags on, emotions manifest, ebb and flow in myriad of ways. We find ourselves finding refuge in new avenues, shifting our values of what is important and finding more gravity in celebrating the everyday while feeling the weight of a radically shifted world. Some experience grief at lost familiarity, grief at the loss of ourselves as we were, and grief for the loss of loved ones. Similarly, we have found that joy and wonder spring up in unexpected or even mundane places. The works collected were open-ended interpretations, guiding participants only by a prompt that invited the widest form of submissions. We asked our community what grief and joy look like in their lives. We offer an introspective reflection via various physical diffractions suspended in the space. We create a tapestry of lived human experiences in this work. Upon passing, catching sight of your own reflection adds to this web of experiences, connecting present to past, with your own fleeting experience.

Artist statement: We are a group of University of Oregon students pulling from our various backgrounds of sculpture, ceramics, digital arts and landscape architecture. With the culmination of our various creative abilities and our shared — yet isolated — experiences, we have imagined this wonderful and meaningful creation for our community here in Eugene. We are grateful to have the opportunity to come together to envision and install a public art piece with the capacity to bring people together to reflect upon what we have lost, what we have gained and what we will remember from the past two years. Through the collection and sharing of digital memories from the community, we hope to create a space which is interactive, introspective and cultivates interconnectedness. Thank you to all who contributed to this project! griefjoyeugene@gmail.co 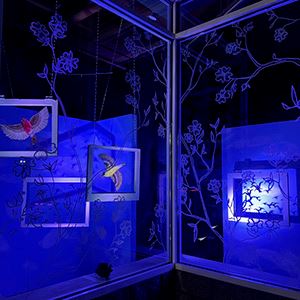 Project description: “Spring Emerges” is a celebration of the vernal equinox and the early signs of the world around us awakening from its winter slumber. Using mixed media to capture the feeling of a season, “Spring Emerges” aims to elicit the same excitement and joy as the first sunny days through the eyes of a person looking to the sky and seeing the first blooms and songbirds of the year. The feeling of relief that comes with the end of winter in Oregon also mirrors our community’s feelings as we pass through another season of isolation during this pandemic. This piece represents hope for the future, reemergence of creativity and community and the glory of the natural world that we are so lucky to be a part of in the Pacific Northwest.

Artist statement: Captivated by the beauty of the natural world, Lindsay strives to capture the wonder in all things around her by exploring non-traditional mediums. With her scientific background heavily influencing her work, she enjoys the challenge of creating with natural and salvaged materials with vintage windows as her primary canvas. She employs manual etching and freehand illustration to create each one-of-a-kind piece. Her assemblage pieces combine foraged biological oddities, such as bones, insects and botanicals, with clay and grown crystals to create surreal worlds with an emphasis on cultivating a respect for nature and conservation. She strives to capture the imagination of her viewer by using unexpected ways through unexpected mediums to highlight the beauty of the world around us. honeyandsass@gmail.com 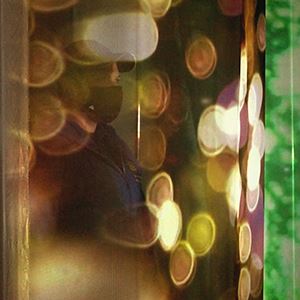 About: The unending flow, strength and adaptability of moving waters contain metaphors that resonate throughout my daily life. Lockdown afforded me more time with nature and I reconnected to the simple magic of sunlight dancing upon the moving surface of the Willamette River. While in contemplation at the river’s edge, I began recording and manipulating videos of this glittery brilliance. FLOW is meant to be an intriguing and beautiful exhibit. It’s a way to connect with the natural world within downtown’s urban setting. But more importantly, my hope is for viewers to pause, experience the river’s radiance, and be invited to realign with their own inner brilliance and flow.

Cari Ingrassia designs unexpected and participatory art experiences that cultivate a community mindset. Her exhibits have ranged from interactive to immersive and include digital, multimedia and sculptural elements. Collaboration is essential to her process from ideation to fabrication to exhibit experience. She partners with artists of other disciplines, capitalizing on their skill sets to make each art installation unique in form and media. Collaboration extends to viewers that playfully engage with the work. cariingrassia.com, @cari.ingrassia.art 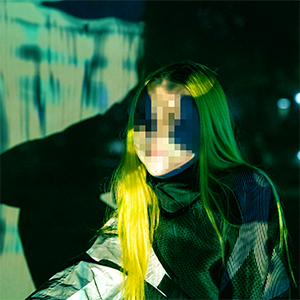 About: Bubble is an audiovisual anthology of dystopian narratives blended together as a seamless mix. The circular form of the projection lends itself to the infinite complexity of the issues presented and "bubbles" of thought, where one can only see issues from their own perspective, restricting them from reason and rational solutions. 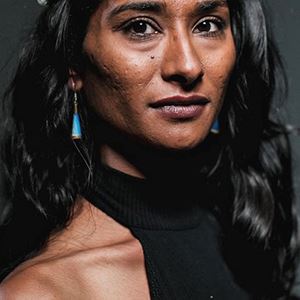 About: Resident artists of Fermata Ballet Collective began the process of this project by creating individual choreographic phrases. After sharing each of our movement sets, we noticed that every one of us included a pulling, reaching, touching, or grasping motion within our desired movement. We theorized that these similar movements possibly came from our collective psyche of trying to navigate the pandemic, the shutdowns, the loneliness, the uncertainty and the need to feel a true and tactile connection with ourselves and others. We organized our individual movements into a dance, creating “GRASP”. This black and white film takes the viewer through our motions in an intimate way - allowing the audience to see the tendons, fingers, toes, muscles and eyes as we move with intention. After GRASP, we feature each of our resident artists as they perform improvisational dance and/or selected movements from the original choreography.

Fermata Ballet Collective (FBC) was founded by seven dancers in 2020 during the COVID-19 pandemic as a safe environment to create art and stability in our community while the world around us remains in unrest. During this pause in regular arts programming, FBC acts as a refuge for dancers who have found their careers and projects on hold due to the pandemic, as well as opportunities to explore dance art in a respectful and safe manner with a focus on inclusivity and social justice.

FBC is determined to cultivate a collaborative approach to the creative process, valuing the experience of each individual without judgment. Our goal is to support artists as they aim to create progressive content with respect, adaptability and responsibility. Genuine and resilient dancers who are committed to creating a safe and professional environment are welcome into our studios. FBC will not tolerate or condone discrimination against any individual regarding race, color, ethnicity, national origin, sex, gender, sexual orientation, pregnancy, appearance, religion, age or ability. fermataballetcollective.com 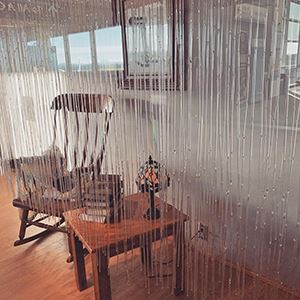 About: This installation of glass art and domestic life coming together is the third iteration in my series Solace. In the two previous artworks, I installed 600 individual strands of hanging glass spread out in a domestic space, a common setting used for quiet reading and meditation. The scenes were set with tables, couches and chairs, stacks of books, and a lamp. The glass as raindrops seemed to dance and play in an unexpected yet familiar way, leaving the viewer entranced and pondering the significance of the scene.

The essence of this series is meant to capture the dazzling visual wonder of a rainstorm and the calming effect that such an event can have on quiet time. In this third installation, I continued with the basic storyline but added the element of an umbrella to speak to the isolation and personal feelings we have all been experiencing during the pandemic years. 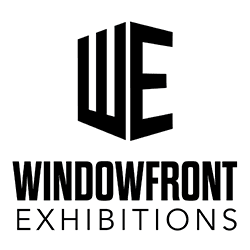